Transport around the time of Christ

No less surprising are the submarines known to the early-fifth-century-BC Greek historian Herodotus and the first-century-AD Roman naturalist Pliny the Elder. Even Aristotle wrote about submarines. His most famous pupil, Alexander the Great, was said to have been on board a glass-covered undersea vessel during an extended shake-down cruise beneath the eastern Mediterranean Sea, around 320 BC. (Forbidden History) 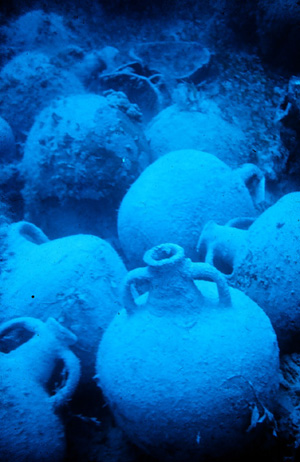 Five ships were from Roman times, presumably lost in storms while plying the busy trade routes from Rome to North Africa. The oldest, a 100-foot-long vessel dating from about 100 BC, is one of the earliest Roman wrecks ever discovered. Her holds were filled with amphoras, the clay shipping containers of the ancient world. Another Roman ship, probably from the first century AD, carried cut stones, apparently ready for assembly into a temple. When marine archaeology was limited to 200 feet, 95 percent of the sea floor was beyond its reach. Archaeologists and historians often assumed that mariners in antiquity hugged the coast and rarely ventured into the open sea. Their assumption is only now being disproved. One of the most intriguing items is the heavy cargo of high-quality marble or granite building stones still in the hold of a Roman ship from the first century The artifacts include monolithic columns and large cut blocks of stone. "Some of the stones appeared to have notches where they were to be fitted together," Dr. Ballard said. "Perhaps this was a prefab temple being shipped somewhere." (108)