The Atlantic route to America and back to the Mediterranean had the assistance of the wind and current both ways. The ships coasted down the west coast of Africa, some of them probably as far as the Gulf of Guinea, depending upon where they intended to make landfall in America. They then turned west with the north-easterly trade winds behind them, upon the current which moves across the Atlantic at about one knot into the Caribbean and washes into the Gulf of Mexico. To return it was necessary only to sail northwards out of the Caribbean and then be borne eastwards on the Gulf Stream, with the prevailing west wind behind them. The southern half of the Gulf Stream swings south to the mouth of the Mediterranean. It was a formidable trip over a formidable distance but fully within the power of Copper and Bronze Age sailors. (The God-Kings & the Titans)

And just as the Polynesians were able to sail at will about the Pacific, so the earliest Bronze Age sailors in the Pacific would have had equal freedom, for in the middle of the second millennium maritime skill was higher than it would be again for three thousand years. (The God-Kings & the Titans)

A craftsman 4,300 years ago molded the clay figurine of a horse, only five inches long and three inches high, but exquisite in detail. It has now been uncovered in northern Syria by archaeologists who call it the oldest known sculpture of a domesticated horse and one of the finest ancient representations of a horse ever discovered. The figurine and other artifacts have been dated at 2300 BC, about the time Sargon of Agade ruled the Akkadian Empire, successor to the Sumerians, and the region's turbulent history was being recorded in cuneiform script on the clay tablets of the Ebla library. Until recently, it was thought that domesticated horses did not figure in Middle East history until at least 500 years later. A number of model chariots also found suggested that the horse was already being used to draw war chariots, as well as for transportation. (86)

The seventh wild horse relative, the onager of western Asia, may have been used to pull wagons for some centuries after 3000 BC. But all accounts of the onager blast its vile disposition with adjectives like "bad-tempered," "irascible," "unapproachable," "unchangeable," and "inherently intractable." The vicious beasts had to be kept muzzled to prevent them from biting their attendants. When domesticated horses reached the Middle East around 2300 BC, onagers were finally kicked onto the scrap heap of failed domesticates. (The Third Chimpanzee)

About 1750 BC the chieftains who lived on the east bank of the Tigris began to cross that river and settle themselves on the rich lands in Lower Mesopotamia, and they succeeded in making the natives do their will. They owed their success in Babylonia chiefly to the horse, which they introduced into Babylonia, for the natives had never ridden any animal that moved faster than a camel or ass. As with the Hyksos in Egypt, the mobility which the horse gave them made them masters of the country in a comparatively short period. (Babylonian Life and History)

The wheel appeared in Sumer about 3200 BC, but not in Egypt until fourteen hundred years later. For the Nile supplied the best possible transportation; and it was not until the light war chariot, maneuverable in battle and drawn by steeds, had been invented that the wheel recommended itself as a valuable addition to the culture of the Pharaohs. The date of the introduction of writing, the calendar, and their associated arts to Egypt was c. 2800 BC; that of the wheel, c. 1800 BC. (Primitive Mythology)

The Egyptian barge, admittedly a river boat, which took the two obelisks of Queen Hatsheput (1502-1480 BC) down the Nile, measured 200 by 80 feet, and with its load weighed 1,500 tons. Egyptian boat-building was later superior to that of Rome. (The God-Kings & the Titans) 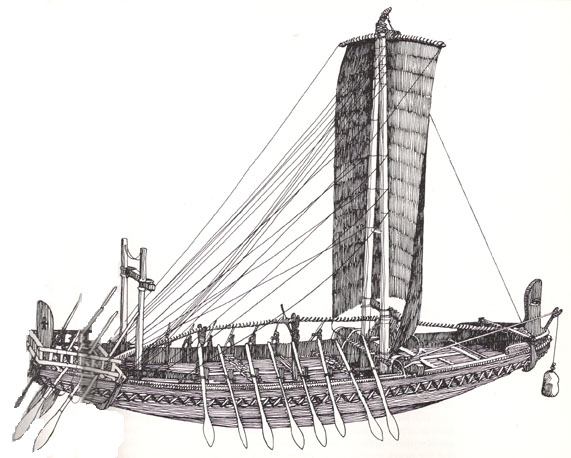 Egyptian ship of about the eighteenth century BC

....the cosmetics used by an Egyptian princess of the sixth dynasty 2400-2300 BC and found part of them antimony, used for making kohl or eye-shade for Egyptian women. Antimony was not found in Egypt and the antimony mines in Persia and Turkey were not discovered until much later. He concludes: If the Egyptians used antimony in the time of the sixth dynasty it could have come only from Rhodesia. At that period the Egyptians were making frequent voyages to the Land of Punt-Knemhotep the sailor, he who visited it eleven times, lived in that period - and the distance is known to have been about 4000 miles. To make a round sea voyage of 8000 miles at that time was a great achievement. (The God-Kings & the Titans)

Clay and metal models of wheeled carts and river boats are the only artifacts remaining of a transportation system that once probably moved large quantities of flint tools, pots, and other artifacts, some mass-produced at a few locations. (Patterns in Prehistory) 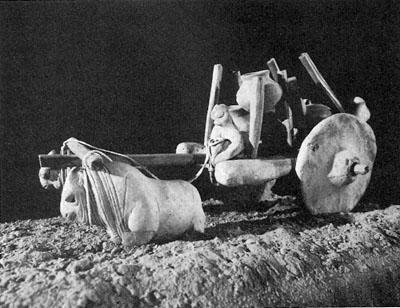 This Harappan toy cart is one of the earliest known models of wheeled vehicles. (Patterns in Prehistory)

Domestic horses and camels were in use by the mid-second millennium BC in much of this area, and with the addition of two-wheeled carts, the development of a diet based on milk products rather than meat, and the emergence of an aggressive chiefdom-like command structure, Eurasian nomads terrorized Europe and sacked China time and time again. (Patterns in Prehistory)

In ancient graves on the steppes of Russia and Kazakhstan, archaeologists have uncovered skulls and bones of sacrificed horses and, perhaps most significantly, traces of spoked wheels. These appear to be the wheels of chariots, the earliest direct evidence for the existence of the two-wheeled high-performance vehicles that transformed the technology of transport and warfare. New analysis of material from the graves shows that these chariots were built more than 4,000 years ago, strengthening the case for their origin in the steppes rather than in the Middle East. In a grave pit at Krivoe Ozero, 120 miles north of Sintashta, archaeologists had found an assemblage of materials typical of these burials. The heads of two ritually killed horses were deposited next to the body of a man and a chariot, much like later Aryan practices. Other grave goods included spear points, a bronze ax and a dagger, three pots and four disk-shaped cheekpieces from a horse harness. This yielded a range of age estimates, from 2136 to 1904 BC, with an average of 2026--much earlier than the Russians had estimated. Sintashta-Petrovka wheels had eight to 12 spokes. Early chariots in the Middle East, as revealed in the Anatolian seal impressions, had only four spokes. The steppe chariots were also quite narrow. The distance between the two wheels was consistently less than four feet, probably suitable for only one person. Dr. James D. Muhly…said the findings were important because they revealed a moment in the transition from wagons and carts with solid wheels to lighter vehicles with the spoked wheel, which weighed a tenth as much as the solid versions. (81)

…the military value of horses continued to improve with inventions ranging from metal bits and horse-drawn battle chariots around 2000 BC to the horseshoes, stirrups, and saddles of later cavalry. While most of these advances didn't originate in the steppes, steppe peoples were still the ones who profited the most, because they always had more pasture and hence more horses. (The Third Chimpanzee)

Ships built in Crete during the Bronze Age were 100 feet and longer. They had up to 50 rowers, 25 on each side. They'd built their "kivas" all through the Mediterranean in Sicily, Sardinia, Balearic Isles, Malta, and then in Spain, had moved out past Gibraltar, built more "kivas" in Brittany, the British Isles, England, Ireland, then up to Denmark and, in a more southerly route, across the Atlantic to the Azores, which may have been a much larger landmass in Neolithic times, to the Americas. (Gods of the Cataclysm)

Now in 1938 the Wright brothers discovered an ancient boat in the Humber mud. It was excavated and has since been carbon dated to 1600 BC. It is held to be of Indo-Pacific design. This will not appear surprising in view of the eastward and westward trading policies of the Middle East in general and of the Phoenicians in particular. It is called the Ferriby boat.

Reconstruction of boat I from North Ferriby, a sewn boat.