The invention of the kiln also made it possible to smelt and alloy metals, two more processes to add to an amazing string of innovations in a very compressed period of time. (The Genesis Race)

Uruk (Erech) took the archaeologists back into the fourth millennium BC. There they found the first colored pottery baked in a kiln, and evidence of the first use of a potter's wheel. (The 12th Planet)

The chief Egyptian sites of the basal stratum are on the left bank of the Nile, at Merimde, in the Delta region, and at Fayum, somewhat farther south, as well as on the right bank, about two hundred miles up the river, at Tasa. The assemblages differ slightly among themselves but in their culture level are about equivalent, the characteristic features being a rough black pottery; excellent basketry; spindle whorls for the fashioning of linen; palettes for cosmetics; burial in a contracted posture (at Tasa) or as in sleep, facing east (Merimde) ; bone, ivory, and (at Fayum) ostrich-shell beads; boar's-tusk and tiny stone-ax (celt) amulets (at Merimde); wheat stored in silos; and a barnyard stock of swine, cattle, sheep, and goats. C-14 dates for Fayum range c. 444O-c. 4100 BC. (Primitive Mythology)

Lidio Cipriani in 1952 excavated a series of huge Andamanese kitchen middens, which must have been accumulating for a period of some five or six thousand years. And he found: (1) to a depth of about six inches from the top, European imports, chips of broken bottles, rifle-bullets, pieces of iron, etc.; (2) going deeper for many feet, crab legs that had been used as smoking pipes, the bones of pigs, pottery shards, and well-preserved clam shells; (3) within about three feet from the bottom, no crab-leg pipes, no pig bones, no pottery, and clamshells heavily calcinated, showing that they had been exposed directly to the fire. Conclusion: "The Andamanese," writes Cipriani, "on their arrival, did not know pottery. Previous to its introduction, food was roasted in the fire or in hot ashes; later, it was boiled in pots...The first Andamanese pottery is of good make, with clay well worked and well burned in the fire. The more we approach the upper strata, the more it undergoes a degeneration...Bones of Sus andamanensis [the Andamanese pig] begin to appear later than pottery. They become more frequent, the more we approach the top levels. The inevitable conclusion would seem to be that the ancient Andamanese knew neither pottery nor the hunting of pigs. It is likely that both pottery and a domesticated Sus were introduced by one and the same people." Thus, once again, diffusion even here, and regression: regressed neolithic, along with the great neolithic myth of Venus and Adonis, Ishtar and Tammuz, now transformed by the principle of land-nama into Lady Civet Cat and Sir Monitor Lizard. (Primitive Mythology)

...this is what the discoveries at Harappa and Mohenjo-daro have now placed beyond question. They exhibit the Indus peoples of the fourth and third millennia BC, in possession of a highly developed culture in which no vestige of Indo-Aryan influence is to be found. Like the rest of Western Asia, the Indus country is still in the Chalcolithic Age - that age in which arms and utensils of stone continue to be used side by side with those of copper or bronze. They are skilful metal workers, with a plentiful supply of gold, silver, and copper. Lead, too, and tin are in use, but the latter only as an alloy in the making of bronze. Their weapons of war and of the chase are the bow and arrow, spear and axe, dagger and mace. The sword they have not yet evolved; nor is there any evidence of defensive body armour. Among their other implements, hatchets, sickles, saws, chisels and razors are made of both copper and bronze; knives and celts sometimes of these metals, sometimes of chert or other hard stones. For the crushing of grain they have the muller and saddle-quem but not the circular grindstone. Their domestic vessels are commonly of earthenware turned on the wheel and not infrequently painted with encaustic designs; more rarely they are of copper, bronze, or silver. (The God-Kings & the Titans)

Besides establishing a highly efficient agriculture and such basic industries as the making of textiles and ceramics, the Sumerians invented new materials including glass and became outstanding glaziers as well as metalworkers using gold, silver, copper and bronze. They became accomplished stone carvers and creators of delicate filigree work and carpentry, but without doubt the most important invention of these amazingly competent people was the wheel. (The Hyram Key)

No doubt most villagers were full-time agriculturalists, but some engaged in silkworm cultivation, pottery manufacture, jade carving, and leather and textile production. (Patterns in Prehistory) 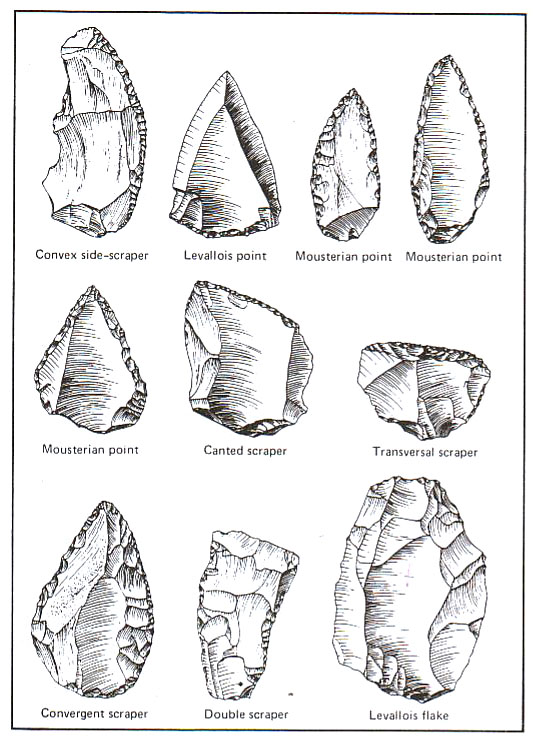 …the Varna cemetery near the Black Sea coast of Bulgaria, dating to about 4000 BC, contained massive hoards of golden and copper tools, suggesting not only great differences in economic classes in this society, but also the existence of a metallurgical industry of considerable sophistication. (Patterns in Prehistory)

These early farmers ploughed the ground with animal bones and planted seeds using a simple kind of mattock or hoe before harvesting their crops with flint sickles and using flat querns (grinding stones) to grind the grain. Stone tools made from flint, chert beach pebbles and rum bloodstone were used and polished stone axe heads were manufactured in Ireland from around 4000 BC... (Civilization One)

Between 9,000 and 2,500 years ago Desert West cultures worked out a marvelous array of subsistence technologies and strategies, and the aridity of the environment has preserved artifacts so well that we can reconstruct their way of life in considerable detail. Wooden clubs, twined basketry, grinding stones atlatl points, and many other items have been found. (Patterns in Prehistory)

The Koster site, in the Illinois River Valley, was first occupied at about 7,500 BC, and people lived at this site many times, at least until about 2,500 BC. These people slowly improved their technologies, adding new varieties of stone tools, more permanent forms of housing made of clay, poles, and thatch, rare implements of copper for which they traded with neighboring groups, and various other tools. (Patterns in Prehistory)

...the mining on Isle Royale in Lake Superior and the upper peninsular of Michigan in America shows that mining and the fashioning of copper tools and weapons around the mines was carried on from 5000 to 1000 BC. (The God-Kings & the Titans)

Bronze-making may have been invented at different times by different people. Already by 4500 B.C. people in Southeast Asia, at sites like Ban Chiang, in Thailand, were using cast-bronze spearheads and ornaments. (Patterns in Prehistory)