Tools around 3 Million BC

Scholars dispute whether any of the australopithecines used stone tools. Thier remains have been found with such tools but the association is ambiguous. (Patterns in Prehistory)

The earliest tool users whose physical remains we have found left their lithic handiwork at Kada Gona, Ethiopia, about 2.6 million years ago and slightly later at other sites in the Hadar country and around Lake Turkana in northern Kenya. They were smallish creatures, more ape than human, at least to the casual eye, and they had brains about a third the size of ours. However, in the ratio of brain volume to body mass, they were the smartest land mammals of their time. (The First Americans)

Specimens incised in a manner similar to those of St. Prest were found by J. Desnoyers in a collection of bones gathered from the valley of the Arno River (Val d' Arno) in Italy. The grooved bones were from the same types of animals found at St. Prest--including Elephas meridionalis and Rhinoceros etruscus. They were attributed to the Pliocene stage called the Astian. This would yield a date of 3-4 million years. But it is possible that the bones could be as little as 1.3 million years old, which is when Elephas meriodionalis became extinct in Europe. (The Hidden History of the Human Race)

Grooved bones also were discovered in other parts of Italy. On September 20, 1865, at the meeting of the Italian Society of Natural Sciences at Spezzia, Professor Ramorino presented bones of extinct species of red deer and rhinoceros bearing what he believed were human incisions. These specimens were found at San Giovanni, in the vicinity of Siena, and like the Val d' Arno bones were said to be from the Astian stage of the Pliocene period. (The Hidden History of the Human Race)

In 1876, at a meeting of the Geological Committee of Italy, M. A. Ferretti showed a fossil animal bone bearing "traces of work of the hand of man, so evident as to exclude all doubt to the contrary." This bone, of elephant or rhinoceros, was found firmly in place in Astian (Late Pliocene) strata in San Valentino (Reggio d'Emilie), Italy. Of special interest is the fact that the fossil bone has an almost perfectly round hole at the place of its greatest width. According to Ferretti, the hole in the bone was not the work of molluscs or crustaceans. The next year Ferretti showed to the Committee another bone bearing traces of human work. It was found in blue Pliocene clay, of Astian age, at San Ruffino. This bone appeared to have been partially sawn through at one end, and then broken. (The Hidden History of the Human Race)

At a scientific conference held in 1880, G. Bellucci, of the Italian Society for Anthropology and Geography, called attention to new discoveries in San Valentino and Castello delle Forme, near Perugia. These included animal bones bearing cuts and impact marks from stones implements, carbonized bones, and flint flakes. All were recovered from lacustrine Pliocene clays, characterized by a fauna like that of the classic Val d' Arno. According to Bellucci, these objects proved the existence of man in the Pliocene. (The Hidden History of the Human Race) 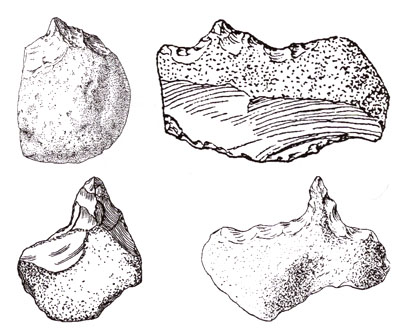 How old were the these Paleolithic tools? Prestwich and Harrison considered some of the stone implements found near Ightham to be Pliocene in age. Twentieth-century geologists, such as Francis H. Edmunds of the Geological Survey of Great Britain, have also said that the gravels in which many of the implements were found are Pliocene. Hugo Oberrnaier, a leading paleoanthropologist of the early twentieth century, stated that the flint implements collected by Harrison from the Kent Plateau belong to the Middle Pliocene. A Late or Middle Pliocene date for the implements of the Kent Plateau would give them an age of 2-4 million years. Unifacial tools, with regular chipping confined to one side of a surface, formed a large part of the eoliths gathered by Harrison. According to Patterson's criterion, these would have to be accepted as objects of human manufacture. (The Hidden History of the Human Race) 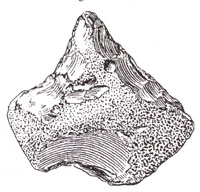 After studying modern geological reports, we have arrived at an age of at least 2.0-2.5 million years for the red Crag. The Coralline Crag would thus be older. Below the Red Crags of East Anglia there detritus beds, sometimes called bone beds. These are composed of a mixture of materials--sands, gravels, shells and bones derived from a variety of older formations, including the Eocene London Clay. J. Reid Moir found in the sub­Crag detritus beds stone tools, showing varying degrees of intentional work (left). Having concluded that the cruder tools were from as far back as the Eocene, Moir said "it becomes necessary to recognize a much higher antiquity for the human race than has hitherto been supposed." (The Hidden History of the Human Race)

An important set of discoveries by Moir occurred at Foxhall, where he found stone tools (above) in the middle of the Late Pliocene Red Crag formation. The Foxhall implements would thus be over 2.0 million years old. Moir wrote in 1927: "The finds consisted of the debris of a flint workshop, and included hammer-stones, cores from which flakes had been struck, finished implements, numerous flakes, and several calcined stones showing that fires had been lighted at this spot. The commission, formed at the request of the International Institute of Anthropology, was composed of eight prominent European and American anthropologists, geologists, and archeologists. This group supported Moir's conclusions. They concluded that the flints from the base of the Red Crag near Ipswich were in undisturbed strata, at least Pliocene in age. Furthermore, the flaking on the flints was undoubtedly of human origin. Members of the commission also carried out four excavations into the detritus bed below the Red Crag and themselves found five typical specimens. These tools would be at least 2.5 million years old. And because the detritus bed contains materials from ancient Eocene land surfaces, the tools might be up to 55 million years old. (The Hidden History of the Human Race)

Commission member Louis Capitan stated: "There exist at the base of the Crag, in undisturbed strata, worked flints (we have observed them ourselves). These are not made by anything other than a human or hominid which existed in the Tertiary epoch. This fact is found by us prehistorians to be absolutely demonstrated." Burkitt then delivered a striking conclusion about the implements discovered in and below the Red Crag: "The eoliths themselves are mostly much older than the late pliocene deposits in which they were found. Some of them might actually date back to pre-pliocene times." In other words, he was prepared to accept the existence of intelligent toolmaking hominids in England over 5 million years ago. Another supporter of Moir's finds was Louis Leakey, who wrote in 1960: "It is more than likely that primitive humans were present in Europe during the Lower Pleistocene, just as they were in Africa, and certainly a proportion of the specimens from the sub-crag deposits appear to be humanly flaked and cannot be regarded merely as the result of natural forces. Implements from below the Crags would, however, be not Early (Lower) Pleistocene but at least Late Pliocene in age."(The Hidden History of the Human Race)

Sling stones and bola stones represent a level of technological sophistication universally associated with modern Homo sapiens. It may be recalled that the detritus bed below the Red Crag contains fossils and sediments from habitable land surfaces ranging from Pliocene to Eocene in age. Therefore the Bramford sling stone could be anywhere from 2 to 55 million years old. A drawing (left) showing marks of intentional shaping on the sling stone from the beneath the Red Crag at Bramford, England. (The Hidden History of the Human Race)

In 1887, Florentino Ameghino made some significant discoveries at Monte Hermoso, on the coast of Argentina about 37 miles northeast of Bahia Blanca. Summarizing the Monte Hermoso evidence, F. Ameghino said: "The presence of man, or rather his precursor, at this ancient site, is demonstrated by the presence of crudely worked flints, like those of the Miocene of Portugal, carved bones, burned bones, and burned earth proceeding from ancient fireplaces." The layers containing this evidence are in the Pliocene Monte Hermosan formation, which is about 3.5 million years old. Among the fossils recovered from Monte Hermoso was a hominid atlas (the first bone of the spinal column, at the base of the skull). (The Hidden History of the Human Race)

From 1912 to 1914, Carlos Ameghino and his associates, working on behalf of the natural history museums of Buenos Aires and La Plata, discovered stone tools in the Pliocene Chapadmalalan formation at the base of a barranca, or cliff, extending along the seaside at Miramar. In order to confirm the age of the implements, Carlos Ameghino invited a commission of four geologists to give their opinion. After carefully investigating the site, the commission unanimously concluded that the implements had been found in undisturbed Chapadmalalan sediments. The implements would thus be 2-3 million years old. While present at the site, the commission members witnessed the extraction of a stone ball and a flint knife from the Pliocene formation. They were thus able to confirm the genuineness of the discoveries. From the top of the Late Pliocene Chapadmalalan layers, Ameghino extracted the femur of a toxodon, an extinct South American hoofed mammal, resembling a furry, short-legged, hornless rhinoceros. Ameghino discovered embedded in the toxodon femur a stone arrowhead or lance point, giving evidence for culturally advanced humans 2-3 million years ago in Argentina. The bolas of Miramar are significant in that they point to the existence of human beings of a high level of culture during the Pliocene, and perhaps even earlier, in South America. Similar implements have been found in Africa and Europe in formations of Pliocene age. (The Hidden History of the Human Race)