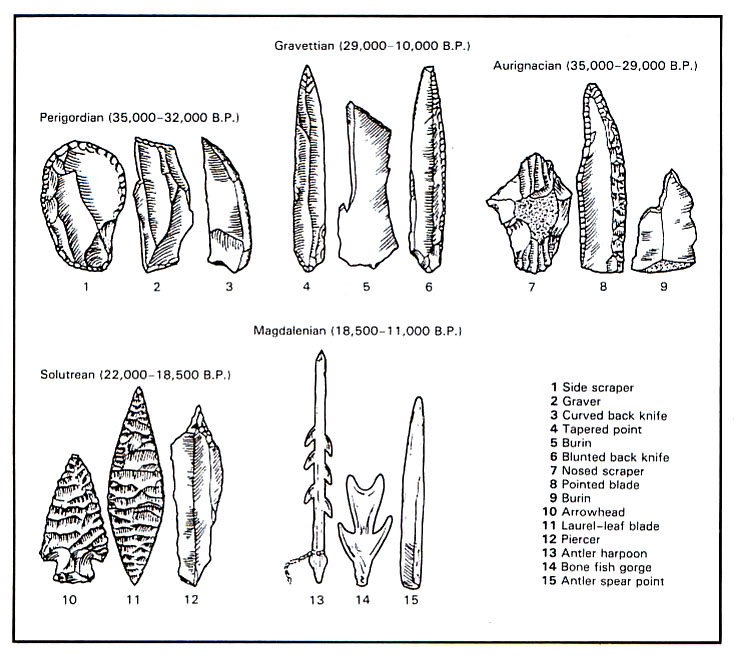 Solutrean culture, named after the site of Solutre and known for a unique style of toolmaking, flourished roughly seventeen thousand to twenty-one thousand years ago in southwestern France. They were known primarily for beautifully made symmetrical, bifacial flakes of a laurel-leaf design with shouldered points. The origins of their industry are somewhat disputed, but there is evidence to suggest that it was an invention indigenous to the Dordogne. Others assign its sudden appearance to the arrival of a new people. The laurel-leaf and willow-leaf styles of point and blade construction, highly regarded because of detail and fine workmanship, distinguished the Solutrean as a great toolmaking culture. These techniques would be used for thousands of years to come, and marked the transition from unifacial points (points flaked on only one side) to bifacial (two-sided flaking). Unifacial points were common early in the Solutrean period. Laurel-leaf blades and bifacial points gradually replaced them. Solutrean technology also marked the first use of the edge-to-edge percussion flaking technique called outre passe. Some items that were made this way were used for adornment. They were so fine in their craftsmanship that they preclude use as tools (suggesting purposes of luxury alone). (Before the Pharaohs)

An even more contentious aspect of peopling the Americas relates to tracing the origins of the technology that produced the Clovis points and their successors. The distinctive, beautifully crafted, bifacial fluted flint spearheads are clearly a feature of the people who moved into North America. There is, however, virtually no evidence of similar artefacts in Siberia. By way of contrast, an almost identical form of technology existed in southwestern France between 21 and 17 kya, associated with the people known as Solutreans. This coincidence has led a proposal that maybe these people, fleeing from the full rigours of the LGM, somehow crossed the Atlantic and became among the earliest settlers in North America. (Climate Change in Prehistory)