A new situation developed, however, when the northern, bitterly cold regions north of the Elburz-Himalayan mountain line were entered, about 200,000 BC, by our sturdy friends of the Neanderthal race. Apparently the possession of fire and the idea of wearing animal skins to keep out the cold made it possible for the tribes of men to brave in number the rigors of the lands of the north, which offered to those who could enter them the advantage of abundant meat. Moreover, the brain power of the species had considerably increased; for, whereas the range in the period of Pithecanthropus had been from about 900 to about 1200 cc., that of Neanderthal was from 1250 to about 1725 - considerably greater at the upper range, that is to say, than the norm for man today, which, as we have said, is a mere 1400 to 1500 cc. The picture is no longer that of a lot of scattered families of moronic ape-men, but of an extraordinarily sturdy race of human beings, perhaps of a slightly higher mental order than ourselves, fighting it out, at the dawn of what may be considered to be our properly human history, in a landscape calling for every bit of wit and spunk at their disposal. We do not know what the hunting methods of these Neanderthalers can have been. There was a great disparity between the size of their weapons and the animals that were their prey. The chase was pursued with wooden, flint-pointed spears, throwing stones, and boomerangs, while the animals sought and slain were the mammoth, rhinoceros, wild horse, bison, wild cattle, reindeer and deer, the brown bear, and the cave bear. These beasts were pursued afoot and met face to face, at close quarters. ...a number of the Neanderthal skulls found at Krapina and Ehringsdorf provide evidence also of his ritual cannibalism. They had been opened in a certain interesting way. Furthermore, every one of the unearthed skulls of Neanderthal's Javanese contemporary, Solo Man (Ngangdong Man), had also been opened. And finally, when skulls opened by the modern headhunters of Borneo for the purpose of lapping up the brains are compared with those of Solo and Neanderthal - the skulls having served, handily, as the bowls for their own contents - they are found to have been opened in precisely the same way. (Primitive Mythology)

There is also evidence in Africa of long-distance exchange of raw materials 140,000 years ago, as well as surface mining 100,000 years ago. (Before the Pharaohs)

Dr. David Roberts, a South African geologist, was the first to lay eyes on the three footprints in rock within 20 feet of the edge of Langebaan Lagoon, about 60 miles north of Cape Town. He was acting on a hunch. He had been picking up rock fragments that had apparently been chipped by human ancestors. And the surrounding gray sandstone was marked by animal tracks. Several different dating techniques were applied in analyzing the rock bearing the prints, and they all agreed on an age of 117,000 years, give or take a few thousand years. After finding the tracks, Dr. Roberts uncovered a number of stone tools that must have been made and used by the same people to kill and butcher prey and prepare skins. These tools included blades, scrapers, a projectile point and a large rock core from which flakes were struck. (75)

It is clear from the archaeological record that something significant began happening around 100,000 to 130,000 years ago. For the first time, we see sophisticated tools like bone harpoons making an appearance; the use of ocher as a cosmetic becomes fashionable; and the start of culturally modern thinking is evident. Only along the Cape coast does all of this come together in the archaeological record of Africa. (In the Footsteps of Eve)

The Middle Stone Age is the first time we see refined and hafted spear points being manufactured; there are scrapers, choppers, and small blades. And recent evidence from caves and open sites in coastal southern Africa suggests that by around 100,000 years ago, this culture gained the rudimentary aspects of modern human behavior. At sites like Blombos cave on the southern Cape and at Hoedjiespunt on the western Cape, the use of bone harpoons and ocher had become common. Bone harpoons indicate a sophisticated level of tool manufacture and food acquisition that is clearly modern. (In the Footsteps of Eve)

Stone tools, utensils, and vessels have been found by gold miners beneath Table Mountain in Cape Town, South Africa. The objects were embedded in rock strata confirmed to be 55 million years old. (Humans are Not from Earth)

125,000 years ago Another early migration from Africa is thought to have stalled around Israel. Tools from this era have also been found in Arabian archaeological digs. (Humans are Not from Earth)

Outside Africa, evidence of the possible use of fire is problematic before about 500,000 to 250,000 years ago, when unmistakable hearths have been documented at a site called Locality 1 at Zhoukoudian in north China. In France, Spain, and Central Europe, scant evidence exists, most of it more recent than 400,000 to 300,000 years ago. Actual hearths or fireplaces appear quite late in Europe and the Near East, but this may well reflect inadequate field recognition and recovery techniques, not a genuine absense of fire. Once again, however, the mere presence of humans in seasonally cold areas says more about the capacity of later hominids to adapt than does the incidence of firepits. (The First Americans)

The Terra Amata site is located on the Mediterranean coast of southern France. There, in the late 1960s, French anthropologist Henry de Lumley found oval patterns of post holes and stone circles indicating that hominids erected temporary shelters and built fires about 400,000 years ago. Also found were bone tools. Among them was one apparently used as an awl, perhaps to sew skins. Impressions found in the old land surface at the site were said to demonstrate that the hominids slept or sat on hides. Stone implements were also found, including an object described as a projectile point, made from volcanic rock obtained from the Esterel region, 30 miles away. (The Hidden History of the Human Race)

Support for the authenticity of the Calico tools has come from a find in Brazil. In 1982, Malia Beltrao found a series of caves with wall paintings in the state of Bahia. In 1985, a trench was cut in the Toea da Esperanca (Cave of Hope), and excavations in 1986 and 1987 yielded crude stone tools associated with Pleistocene mammals. When the bones were tested by the uranium series method, ages in excess of 200,000 years were obtained. The maximum age was 295,000 years. The tools were fashioned from quartz pebbles and were somewhat like those from Olduvai Gorge. The nearest source of quartz pebbles is about 10 kilometers from the cave site. (The Hidden History of the Human Race)

Stone tools have also been found in Toca da Tira Peia, on the Serra da Capivara plateau in Brazil, that have been confirmed to be 22,000 years old. (Humans are Not from Earth)

...some definite evidence at the Calico site in the Mojave Desert of California. This site is situated near the shore of now-vanished Pleistocene Lake Manix. Over a period of eighteen years of excavation under the direction of Ruth D. Simpson, 11,400 eolithlike artifacts were recovered from a number of levels. The oldest artifact­bearing level has been given an age of 200,000 years by the uranium series method. Ruth D. Simpson stated in 1986: "It would be difficult for nature to produce many specimens resembling man-made unifacial tools, with completely unidirectional edge retouch done in a uniform, directed manner. The Calico site has yielded many completely unifacial stone tools with uniform edge retouch. These include end scrapers, side scrapers, and gravers." Flake tools with unifacial, unidirectional chipping, like those found at Calico, are typical of the European eoliths. Examples are also found among the Oldowan industries of East Africa. Among the best tools that turned up at Calico was an excellent beaked graver. Bola stones have also been reported. (The Hidden History of the Human Race)

Projectile point from Level III of the Sheguiandah site (left), Manitoulin Island, Ontario, Canada. Between 1951 and 1955, Thomas E. Lee, an anthropologist at the National Museum of Canada, carried out excavations at Sheguiandah, on Manitoulin Island in Lake Huron. How old were the tools? Three of the four geologists who studied the site thought the tools were from the last interglacial. This would make them from 75,000 to 125,000 years old. Finally, in a joint statement, all four geologists compromised on a "minimum" age of 30,000 years. (The Hidden History of the Human Race) 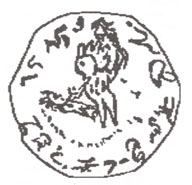 This coinlike object (right), from a well boring near Lawn Ridge, Illinois, was at a depth of about 114 feet below the surface. According to information supplied by the Illinois State Geological /survey, the deposits containing the coin are between 200,000 and 400,000 years old. (The Hidden History of the Human Race)

Stone tools have been found in Hueyatlaco, near Puebla in Mexico that have been confirmed to be 250,000 years. (Humans are Not from Earth)