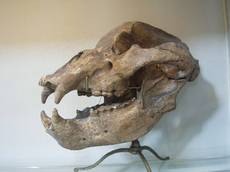 Emil Bachler, between 1903 and 1927, excavated three caves in the high Alps... The first and third were about seven thousand feet and the second over eight thousand above sea level, and they could not have been entered during the period of the Wurm glaciation. Hence their remains have been judged to belong to the interglacial period (Riss-Wurm) at the latest; which is to say, not later than 75,000 BC. And what was found? Charcoal, flints of pre-Mousterian style, flagstone flooring, benches, work tables, and altars for the ritual of the bear - the earliest altars of any kind yet found, or known of, anywhere in the world. (Primitive Mythology)