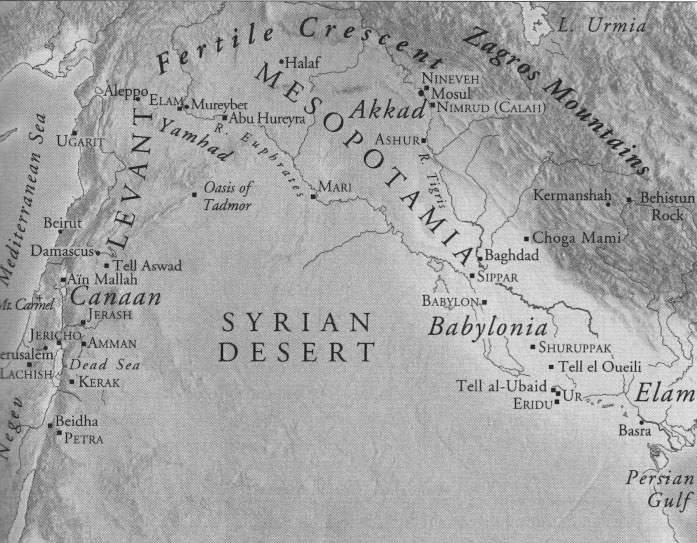 But perhaps the most compelling argument for dating Plato's deluge to the mid-eighth millennium is simply the number and nature of the newly founded settlements that appeared in the east around 75/7300 BC. From Syria and Palestine to east Anatolia and the Zagros mountains, extraordinarily advanced communities emerged, seemingly out of nowhere. An inventory of their collective remains shows that virtually all of the elements upon which the civilizations of later ages would be based--complex hybrid grains, advanced architectural techniques, functional pottery, even the beginnings of metal work--were introduced almost simultaneously by this wave of new settlers. (Plato Prehistorian)

These shrines do not seem to have required the expenditure of vast amounts of labor and resources for essentially noneconomic purposes, as did the monumental constructions of later periods. Nor do they enclose radically different amounts of expensive goods, indicating great wealth disparities. Little about them, in fact, conflicts with the interpretation that they were kinship-cult centers in a simple ranked society.

Men, women, and children were buried in much the same way, either in baskets or simply in holes. Most of the graves contained no goods, but some women and children were accompanied by shell and stone necklaces, armlets and anklets, and, occasionally, obsidian mirrors and bone cosmetic implements. Some men were buried with mace heads, flint daggers, obsidian projectile points, clay seals, and other items. Trade at Catal Huyuk was considerable, but mainly in small quantities of exotic items. (Patterns in Prehistory)

We were nevertheless unprepared for the sudden burst of settlement activity around 75/7300 BC, which sent unexpectedly sophisticated architectural and agricultural skills into Anatolia, Syria, Palestine, and the southernmost reaches of the Zagros mountains of Iran. One could almost say that the Neolithic Revolution was accomplished overnight. After this abrupt introduction of new approaches to clay and stone, grain and metal, no significant change would occur in the Near East for almost two thousand years. (Plato Prehistorian)

Of the several settlements founded in approximately 75/7300 BC--Cayanu, Ganj Dareh D, Jericho PPNB, Abu Hureyra, Alikosh, and the expansion of Tell-Aswad-- no two were similar enough to suggest more than the sharing of a common, and in each case unknown, ancestor from which both had long ago diverged. As notable as the numerical increase in sites undoubtedly was, this variation in previously developed cultural expressions was even more remarkable. There were, in other words, not only a great many new people in the late eighth millennium Near East, but a great many different new people. (Plato Prehistorian)

Our question then - were the rectangular architecture and other innovations at Mureybet III more likely Greek or Atlantic - may therefore be replaced now by the question of the identity of the Mureybet-related PPNB peoples who began settling Syria and Palestine in the last half of the eighth millennium. The likelihood that they were refugees from flooded Aegean lands seems lessened now that we know that red-plastered floors and projectile points will not appear in the earliest recorded settlements of Greece herself. Moreover, PPNB tools as a whole were largely macrolithic, those of Greece largely microlithic. It may thus be the case that PPNB equals Atlantic, rather than Greek, survivors. (Plato Prehistorian)

...Catalhoyuk in central Turkey...was one of the earliest large farming settlements. The striking feature of the settlement was its longevity. The latest radiocarbon dating estimates suggest that it was occupied from around 9.3 to 8.2 kya, It could conceivably have consisted of up to 5000 people in its heyday. Individual buildings were typically occupied for between 50 and 80 years, although it appears that they were actually occupied for a longer duration earlier on and that this decreased through time. Although this was a farming community its principal raison d'etre appears to have been that it was the centre for trade in obsidian that was mined locally. This trade extended as far as southern Palestine. As such it appears to have been a prototype for the trading centres that would come to form the earliest cities of the Middle East. At the same time there is little evidence of the handling of obsidian being concentrated in one part of the settlement. The widespread presence of knapping debris suggests that a significant part of the community was involved with the production of artefacts. (Climate Change in Prehistory)

c. 8500-5500 BC High-point of Watcher culture, which remains in virtual isolation in northern Kurdistan. (From the Ashes of Angels)

In Egypt the gods resumed direct rule after the Flood, but around 7000 BC demigods assumed the throne. (Gods, Genes, and Consciousness)

In her landmark study The Death of Gods in Ancient Egypt Sellers sets out persuasive astronomical and textual evidence to show that the prehistoric Egyptians - at least as far back as 7300 BC - had observed and tracked the slow precessionally induced changes that constantly relocate the cosmic 'address' of the constellation of Orion. And she argues that, although political unity was credited to Menes, there was a much older notion of the 'Unification' based not on events on earth but those observed in the sky...Indeed, she goes so far as to claim that Menes merely brought to fruition a very ancient and archetypal vision of cosmic duality which so perfectly harmonized with the mentality of the ancient Egyptians 'as to appear both inevitable and perennial': 'A dual monarchy united under the rule of one was a form that came from the mists of distant antiquity. It was a form that had been created for gods in the heavens, and how inevitable it was that an imitation of the cosmic order should prevail for men on earth.' (Keeper of Genesis)

As for human activities, the early decline in rainfall in the eastern Sahara may have led to the oldest-known astronomical alignment of megaliths in the world. Consisting of a set of huge stone slabs in the desert of southern Egypt, known as Nabta, it forms a stone circle, a series of flat, tomb-like stone structures and five lines of standing and toppled megaliths, and is dated at around 6.5 to 6 kya. To judge from carbon dating of charcoal and ostrich shells, occupation may have started as early as 12 kya. Initially the settlements at Nabta were small seasonal camps of cattle-herding and ceramic-using people. These cattle are regarded as the first example of the African pattern of herding. The site was intensively exploited by around 9 kya. This included the digging of walk-in wells that suggest the site could have been occupied throughout the year. Nomads used the area until about 5.6 kya, at which time it became hyperarid and uninhabitable. (Climate Change in Prehistory)

...an Indian calendar system identified with the Seven Sages, with a father figure and with a line of kings, had a start date of around 6700 BC - a date that fell well within the time-frame of the greatest floods the earth has known in the past 125,000 years. ... 6700 BC is extremely close to the date at which the first settlement of the remarkable site of Mehrgarh in Baluchistan took place - a site where the systematic planting and cultivation of cereals and vegetables, as well as systematic animal husbandry, was apparently introduced into India for the first time. So let's be clear about the mainstream archaeological position today: 1. The 'nuclear zone' out of which the Indus-Sarasvati civilization emerged was the 'submontane' or 'piedmont' region in the foothills of the Hindu Kush, Karakoram and Himalayan mountain ranges. 2. This 'first stirring' of what was ultimately to become the largest urban culture of the ancient world, took place around the end of the eighth millennium BC and the beginning of the seventh. 3. The earliest surviving and most complete site so far found that bears witness to it is Mehrgarh in the Bolan pass, which dates to around 7000 BC. (Underworld)

There is an unbroken archaeological continuum between Mehrgarh I A around 7000 BC and the upsurge of Mohenjodaro and Harappa as great cities after 3000 BC. For some reason the rate of growth and development became particularly rapid between 2600 and 2500 BC - the mature phase of incredibly vigorous urban expansion - but you can see the roots even of this phase in many small and large details more than 4000 years older exposed in the excavations of the first habitation layers at Mehrgarh. (Underworld)

Until about the seventh millennium BC, "Barbarian Europe"--the great forests, grasslands, and mountain ranges beyond the Aegean Sea and extending north to Britain, Scandinavia, and Russia, was inhabited only by hunters, and foragers. In succeeding millennia, Europeans developed complex forms of subsistence and adaptation, and a rich cultural repertoire of technology and social systems, but throughout prehistory and well into the early centuries of the first millennium AD, European cultures were not the equal of those of Egypt, Mesopotamia, China, and other areas in most of the characteristics of cultural "complexity". (Patterns in Prehistory)

…if some of the domesticated plants and animals, building and ceramic techniques, were either acquired or improved through contact with the east, a careful analysis of the existing data argues in favor of a largely independent Neolithic development of Greece. Moreover, when painted patterns are applied to ceramic vessels later in the period, the individuality of local designs throughout Greece and the Balkans speaks even more clearly for the presence in these lands of heretofore invisible native populations. (Plato Prehistorian)

Catalhoyuk seems to show us that the development of large, sedentary settlements at the end of the Pleistocene was not necessarily prefaced by the development of intensive agriculture. Catalhoyuk was not a city but, as archaeologist Guillermo Algaze describes it, an "overgrown village". For example, there is no public architecture, no evidence of municipal buildings, palaces temples, or government structures; at least, none have been found in the 4% sample of the site excavated so far. (The Past in Perspective)