Envolution around 4 million BC

It is an inescapable fact of genetics that all people alive in the world are genetically related, and that at some point an individual existed whom we all claim as an ancestor. The only points of debate are how long ago that ancesor lived, and where. DNA data suggests all modern humans are genetic descendants of one small inbred group of prehistoric Africans. (Patterns in Prehistory)

This "African Eve Hypothesis" is based on the study of DNA taken from the mitocondria, which are features in human cells where energy to keep the cell functioning is produced. (Patterns in Prehistory)

There is now general consensus that there were at least four broad categories of hominid that emerged after the split from the ancient chimpanzee lineage - although any new discovery has the potential to change this. The evolutionary pathway appears to have led first from a common ancestor with the chimpanzee to the genus Ardipithecus between four and five million years ago and then to the gracile australopithecines before the emergence of the robust australopithecines and our own genus Homo, approximately 2.5 million years ago. (In the footsteps of Eve)

The australopithecines as a group emerged between four and five million years ago and, in the face of the changing African environment, underwent a number of evolutionary adaptations before disappearing into extinction approximately one million years ago. (In the footsteps of Eve)

At the beginning of the 1990s, there were about eight species of hominid known to have existed between five million years and one million years. Today, we recognize no less than 13 early hominid species, and the numbers of "new" species will grow as the science progresses. (In the footsteps of Eve)

5,000 years ago The tallness gene suddenly appeared, and humans were no longer short. (Humans are Not from Earth)

Paleoanthropologists recognize various species of early hominids in the period between about 4 and 1 million years ago. A substantial number of scholars accept at least four of these species: Australopithicus afarensis, Australopithicus africanus, Australopithicus robustus, and Australopithicus boissei. Several factors identify them as probable members of the same genus: 1) they are all bipedal, walking upright on two legs all or most of the time; 2) they all appeared to have brains only slightly larger, if at all, than modern gorillaas and chimps; 3) they all lived in Africa; and 4) they all had teeth that looked somewhat like ours and differed from those of girillas and chimps in various details. (Patterns in Prehistory) 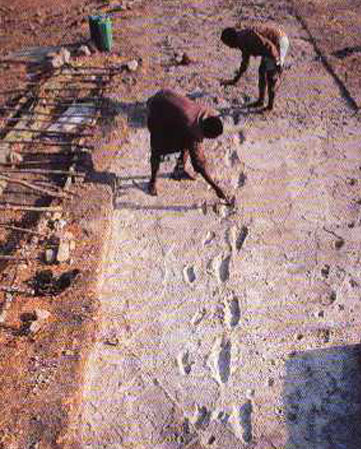 The most famous ancient footprints, made some 3.5 million years ago, were left by two adults and a child, presumably members of the Australopithecus afarensis species, who walked across a plain now known as Laetoli in Tanzania. The long track of prints was discovered in the late 1970s by an expedition led by Dr. Mary Leakey, the noted Kenyan fossil hunter. The prints provided further evidence that human ancestor species were walking upright long before they started making stone tools. (75)

The Laetoli site is located in northern Tanzania, about 30 miles south of Olduvai Gorge. Laetoli is the Masai word for red lily. In 1979, members of an expedition led by Mary Leakey noticed some marks on the ground. They proved to be fossil footprints of animals. Among them were some that appeared to have been made by hominids. The prints had been impressed in layers of volcanic ash, which yielded a potassium-argon age of 3.6 to 3.8 million years. Tuttle concluded: "Strictly on the basis of the morphology of the G prints, their makers could be classified as Homo...because they are so similar to those of Homo sapiens, but their early date would probably deter many palaeoanthropologists from accepting this assignment. I suspect that if the prints were undated, or if they had been given younger dates, most experts would probably accept them as having been made by Homo." Tuttle also stated: "They are like small barefoot Homo sapiens." Furthermore, Tuttle held that the A. afarensis foot could not have made the prints. As we have seen, the A. afarensis foot had long, curved toes, and Tuttle said it was hard to imagine them "fitting neatly into the footprints at Laetoli." The same would be true of any australopithecine foot. And Tuttle noted: "in all discernible morphological features, the feet of the individuals that made the G trails are indistinguishable from those of modern humans." (The Hidden History of the Human Race)

Although there has been some controversy as to whether the prints were made by two or three hominids, what is remarkable is that their shape and gait suggested by the distribution of weight and indentations of the toes, ball, and heel, are surprisingly close to that of modern humans. White believed that they were made by the same species as Lucy. What Laetoli has given us is proof that bipedalism arose in Africa at least four million years ago. (In the footsteps of Eve)

After Ramidus came Australopithecus (with a cranium one quarter the size of Homo sapiens) at 4.0 million BC. (Gods, Genes, and Consciousness)

The Gombore humerus, given an age of about l.5 million years, was found along with crude stone tools. In 1981, Brigitte Senut said that the Gombore humerus "cannot be differentiated from a typical modern human." So now we seem to have two very ancient and humanlike humeri to add to our list of evidence challenging the currently accepted scenario of human evolution. These are the Kanapoi humerus at 4.0-4.5 million years in Kenya and the Gombore humerus at more than 1.5 million years in Ethiopia. They support the view that human beings of modern type have coexisted with other humanlike and apelike creatures for a very long time. The humanlike ER 813 talus is 1.5 to 2.0 million years old, roughly contemporary with creatures designated as Australopithecus robustus, Homo erectus, and Homo habilis. In a subsequent report, Wood said his tests confirmed "the similarity of KNM-ER 813 with modern human bones," showing it to be "not significantly different from the tali of modern bushmen." One could therefore consider the possibility that the KNM-ER 813 talus belonged to an anatomically modern human in the Early Pleistocene or Late Pliocene. (The Hidden History of the Human Race)

We should be...a little more circumspect when we talk of the robust australopithecines as being a bunch of evolutionary losers. Their species enjoyed a 1.6-million-year tenure on Earth before their ecological niche closed over, whether it was through competition with emerging Homo or an environment that shifted beyond their ability to adapt to it. That is nearly a million and a half years longer than our species has been around. The robusts are nevertheless an evolutionary enigma. Possessing massive teeth and jaws, and with the males sporting an imposing crest running down the center of their skull, their appearance must have been startling. There are three known species, and they have one major feature in common - huge teeth behind the canines. Their molars are gigantic, with some individual teeth nearly the size of a U.S. nickel. They also all tend to have multiple roots in the premolars so the enormous teeth can be held in the jaw, whereas modern humans generally have a single root. Their jaws were massive in order to create the support structure for their large grinding platforms. In stark contrast to their huge back teeth, their front teeth are surprisingly small. Their dental apparatus was modified for a nibble-and-chew lifestyle, which required enormous teeth to process this rough food and well­developed chewing muscles with large attachments along the side of the skull. Consequently, they had to have a massive skull to hold all this together, yet their cranial capacity would have been about one-third that of modern humans. (In the footsteps of Eve)

The oldest known possible hominid is Ardipithecus ramidus, a 4.4-million-year-old fossil discovered in 1994 in the Afar region of Ethiopia by Tim White's University of California, Berkeley, research team. (In the footsteps of Eve)

Although I have argued the case for a southern African origin of humans, I believe that the underlying message that arises from a dispassionate view of the present evidence is that we are not in a position to identify a single region of Africa as the birthplace of humankind, particularly in the early hominid record. If anything, the evidence at hand suggests many evolutionary experiments were conducted during the course of the last four or five million years of human evolution across the continent. (In the footsteps of Eve)

4 million years ago The Australopithecines appeared. They were the first hominins to live on the savannah. (Humans are Not from Earth)

Modern geologists place the blue clays at Castenedolo in the Astian stage of the middle Pliocene, which would give the discoveries from Castenedolo an age of about 3-4 million years. 1883, Professor Giuseppe Sergi, an anatomist from the University of Rome visited Ragazzoni and personally examined the human remains at the Technical Institute of Brescia. After studying the bones, he determined they represented four individuals--an adult male, an adult female, and two children. Sergi also visited the site at Castenedolo. He wrote: "I went there accompanied by Ragazzoni, on the 14th of April. The trench that had been excavated in 1880 was still there, and the strata were clearly visible in their geological succession." Sergi was convinced that the Castenedolo skeletons were the remains of humans who lived during the Pliocene period of the Tertiary. The case of Castenedolo demonstrates the shortcomings of the methodology employed by paleoanthropologists. The initial attribution of a Pliocene age to the discoveries of 1860 and 1880 appears justified. The finds were made by a trained geologist, G. Ragazzoni, who carefully observed the stratigraphy at the site. He especially searched for signs of intrusive burial and observed none. Ragazzoni duly reported his findings to his fellow scientists in scientific journals. But because the remains were modern in morphology they came under intense negative scrutiny. As Macalister put it, there had to be something wrong. (The Hidden History of the Human Race)

In the 1850s, while constructing a church, workmen discovered an anatomically modern human skeleton at the bottom of a trench 3 meters (10 feet) deep. The layer containing the skeleton was 3-4 million years old. Arthur Issel communicated details of the Savona find to the member the International Congress of Prehistoric Anthropology and Archeology at Paris in 1867. He declared that the Savona human "was contemporary with the strata in which he was found." Deo Gratias, a student of paleontology, noted: "The body was discovered in an outstretched position, with the arms extending forward, the head slightly bent forward and down, the body very much elevated relative to the legs, like a man in the water."(The Hidden History of the Human Race)

...at Monte Hermoso in Argentina...we will consider the human bone found there--an atlas, the topmost bone of the spinal column. Santiago Pozzi, an employee of the Museum of La Plata, collected it from the Early Pliocene Montehermosan formation during the 1880s. It did not attract much notice until years later. At that time, it was still covered by the characteristic yellowish-brown loess of the Montehermosan formation, which is 3-5 million years old. (The Hidden History of the Human Race)