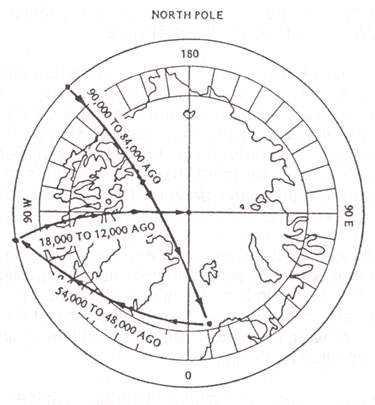 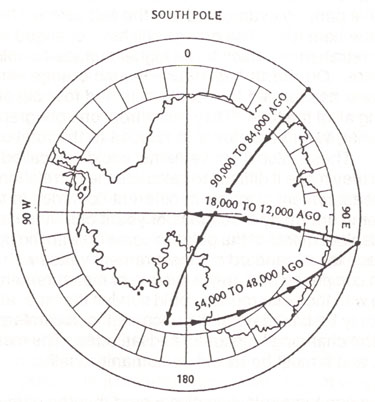 It appears that, in round figures, the poles remain stationary for periods of about 30,000 years, then move around for 6,000 years, then again stay put for 30,000 years, and so on. Scientists have established that the last four rounds of the poles started 120,000 years ago when the North Pole installed itself in the territory of Yukon in Canada at 63° Nand 135° W; then it went to the Greenland Sea at 72° N and 10° E about 84,000 years ago, moved from 54,000 until 48,000 years ago and settled in the middle of Hudson Bay at 60° N and 83° W; it rested there for 30,000 years; then wandered again from about 18,000 to about 12,000 years ago when it came to its present location. Simultaneously the South Pole went through similar gyrations but in the opposite direction. We have to note that its three previous locations were in their turn in the southern part of the Indian Ocean between Australia and the Antarctic itself. Only the last movement 12,000 years ago brought the South Pole to the middle of the great continent of Antarctica. (Our Cosmic Ancestors)

Tracing the equator line of 54,000 years ago and starting again from Africa around the world, we find that it touched the ruins of Zimbabwe, in Rhodesia; the anthropological sites of Java; the Nan Madol ruins of the island of Temuen in the Carolines; the Hawaiian Islands; the Galapagos Islands, in the Pacific; the caves of Cuenca, in Ecuador; and again the mouth of the Amazon. (Our Cosmic Ancestors)

What is now clear is that during the last ice age, and the period that followed it, the climate was much more chaotic than it has been in recent millennia. Generally, the climate was much more variable. Sudden changes occurred from time to time. Collapse of parts of the ice sheets, or release of meltwater lakes that built up behind the ice, led to cataclysmic changes. Armadas of icebergs or floods of icy freshwater swept out into the North Atlantic altering the circulation of the ocean at a stroke and with it the climate of the neighbouring continents. With a flick of the climatic switch, Europe and much of North America could be plunged back into icy conditions, having only just emerged from the abyss of the preceding millennia. Conversely, the stability of the glacial conditions could be interrupted by a re-establishment of the flow of warm water to higher latitudes in the North Atlantic, bringing surprising temporary warmth to the northern continents. (Climate Change in Prehistory)

...the isotopic temperature records show some 20 interstadials, ...between 15 and 100 kya. Typically the events start with an abrupt warming of Greenland of some 5 to 10°C over a few decades or less. This warming is followed by a gradual cooling over several hundred years, and occasionally much longer. This cooling phase often ends with an abrupt final reduction of temperature back to cold ('stadial') conditions. (Climate Change in Prehistory) 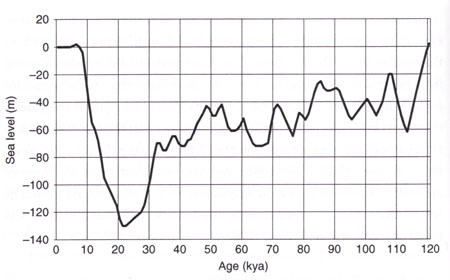 Changes in the sea level during the last 100 kyr. (Climate Change in Prehistory)

The last earth crust displacement occurred 11,600 years ago when all three astronomical cycles meshed, ushering in the present interglacial epoch. The dominant cycle relating to these events is that of the earth’s tilt (now thought to move from the minimum of 21.8° to the maximum of 24.4° every 41,000 years).6 We believe other earth crust displacements occurred during the last glacial epochs at 11,600, 52,600, and 93,600 years ago. (Atlantis Beneath the Ice)

In Israel a detailed lake-level history of the closed Lake Lisan (part of the ancient Dead Sea) indicates that for much of the period from 55 kya to the end of the ice age the level was higher than at present. There were, however, catastrophic droughts associated with the Heinrich events. The impression is that cold-water input to the Mediterranean originating in the collapse of North Atlantic Deep Water formation caused a reduction of evaporation and less precipitation in the Levant. So it is reasonable to conclude that following Heinrich events 6, 5, and 3 much of the Middle East was desert. During these intervals, of which the long cold period from around 67 to 59 kya was the most significant, the region was largely uninhabitable for modern humans. (Climate Change in Prehistory)

A wet climate began in North Africa 50,000 years ago and lasted for 20,000 years. Called the Mousterian Pluvial, this wet era allowed the Sahara to bloom with plants and wildlife, but also with new human settlements. (Before the Pharaohs)

By 75,000 years ago glacial conditions had begun in Europe, and a great ice sheet formed, perhaps on a land bridge connecting the British Isles with Iceland and Greenland. After a few thousand years it had grown thick enough to move out from the center of thickest accumulation by gravity. It covered Ireland, filled the Irish Sea basin and swept across the Welsh mountains into England about 55,000 years ago. Its advance, it appears, required a period of 20,000 to 25,000 years, comparable to the time that was apparently required for the growth of the Wisconsin ice sheet. ...a polar shift occurred at about the time this ice sheet reached its maximum: the shift from the Greenland Sea to Hudson Bay. It is easy to connect the two events: The shift brought the advance to an end and initiated the glacial retreat. This retreat probably started long before 42,000 years ago, and by about 37,000 years ago the ice sheet had left the Irish Sea basin. The decline of the Irish Sea ice sheet seems to have required a period of time similar to the time required for the decline of the Wisconsin ice sheet. The parallel is extremely interesting. (Path of the Poles)

...there is not the slightest evidence that glacial conditions existed in America prior to about 55,000 years ago. On the contrary, the evidence is that James Bay, practically in the very center of the area that was to be glaciated by the Wisconsin ice cap, was ice-free 53,000 years ago. Secondly, the dates suggest that the climate changed in opposite directions in Europe and in America. In Europe, between 50,000 and 37,000 years ago, a gigantic ice sheet that had covered Ireland, the Irish Sea, Wales and half of England melted away, while in America the Wisconsin ice sheet was expanding rapidly. By 30,000 years ago the latter had invaded the United States and stimulated the growth of glaciers on the Pacific coast. (Path of the Poles)

Today, Eskimos using skin boats easily cross the ninety kilometers of open sea separating Siberia and America, and recently an American woman slathered herself with grease and actually swam from Alaska to Siberia. But such a sea crossing would not have been necessary during much of the Pleistocene. During periods of glacial advance within the last million years, enourmous quantities of water were converted to ice, lowering the sea level sufficiently to expose a 1500- to 3000-kilometer-wide expanse of the floor of the Bering Sea. This land bridge--usually referred to as Beringia--was probably available at least four times in the last 60,000 years. (Patterns in Prehistory)

Prior to 10,000 years ago, species of deer, bison,camels, bears, foxes, mammoths, moose, caribou,and even rodents crossed from Siberia into the New World. Going in the other way--from America to Asia--were foxes, woodchucks, and, during the early Pliestocene, the ancestors of modern forms of horses, wolves, and other animals. (Patterns in Prehistory)

Several lines of solid evidence suggest that during the last ice age the North Pole was located in or near Hudson Bay. ...the best guess for the site of the pole seems to be approximately 60 degrees North Latitude and 83 degrees West Longitude. The first line of evidence that the last North American ice cap was a polar ice cap is based on the shape, size, and peculiar geographical location of the ice sheet. (Path of the Poles)

...there is not the slightest evidence that glacial conditions existed in America prior to about 55,000 years ago. On the contrary, the evidence is that James Bay, practically in the very center of the area that was to be glaciated by the Wisconsin ice cap, was ice-free 53,000 years ago. Secondly, the dates suggest that the climate changed in opposite directions in Europe and in America. In Europe, between 50,000 and 37,000 years ago, a gigantic ice sheet that had covered Ireland, the Irish Sea, Wales and half of England melted away, while in America the Wisconsin ice sheet was expanding rapidly. By 30,000 years ago the latter had invaded the United States and stimulated the growth of glaciers on the Pacific coast. (Path of the Poles)

Studies of stalagmites from a cave in southeastern Missouri show remarkably little variation after a marked cooling around 55 kya. Prior to this, conditions appear to have oscillated more frequently. The warmest temperatures occurred around 57 kya and there were short-lived cooling events around 64, 71 and 74 kya. Beetle assemblages suggest that, following the cooling around 55 kya, the mean July temperature was 7.5-8°C lower than present and mean January value was 15-18°C lower than present. During what is termed the 'mid-Wisconsin' interstadial, dating from 43.5 to 39 kya, there was a rapid and intense warming. At the peak of this event, about 42kya, July temperatures were only 1-2°C lower than modern. (Climate Change in Prehistory)

MacNeish’s find is important because it confirms that migration to North America from Siberia was possible between 91,600 BCE and 50,600 BCE and again after the next earth crust displacement at 50,600 BCE. This displacement dragged eastern North America into the polar zone but left islands off the Pacific coast free of ice. The Arctic Circle then lay over Hudson Bay. Greenland remained in the polar zone. Theoretically, from 91,600 BCE to 9600 BCE, people travelling in boats could have moved from Siberia to America along the Pacific Coast where they could navigate between the ice-free islands. (Atlantis Beneath the Ice)