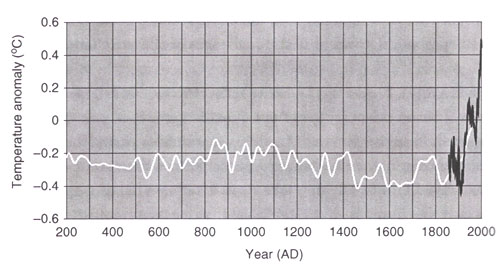 Scientists from the University of Florida said an analysis of sediments beneath Lake Chichancanab on the Yucatan Peninsula provided "the first unambiguous evidence" for a period of extreme aridity between AD 800 and 1000. The drought was the harshest in the region in 8,000 years and coincided with the widespread collapse of Maya culture, a time of spreading warfare and finally the abandonment of many great cities of monumental architecture. And now, in a report published in the journal Nature, scientists have added regional drought as a possibly critical factor in the civilization's fate. The findings from a chemical analysis of shell carbonate and gypsum, burned grasses and root fragments in cores from the lake bed might not alone support the drought theory, they said, but other geological evidence of low lake levels elsewhere in Mexico and Costa Rica suggested that the climate shift was just in Central America. But the drought lasting at least two centuries was probably not solely responsible. The region, Dr. Sabloff noted, was "already under heavy stress" from political, economic and environmental problems. (103)

Another sudden collapse is that of the classical Mayan culture. This is one of the great mysteries of prehistoric Mesoamerica. Having emerged around 1500 BC this civilisation thrived from around AD 250. It is renowned for its monumental constructions and reached a pinnacle in the eighth century. By this time the population density in the Mayan lowlands (which extend over modern-day Guatemala, Belize, Honduras and Mexico) was far higher than current levels. It sustained a sophisticated society that built magnificent buildings and other edifices. But early in the ninth century the civilisation entered a cataclysmic period. The monumental construction and detailed records came to an abrupt end at one centre after another. This decline tallies closely with evidence of extreme drought in the region that comes from analysis of local lake deposits and from ocean sediment cores from the Cariaco Basin off the coast of Venzuela. (Climate Change in Prehistory)

In some prehistoric periods the Southwest was wetter than it is today, but for most of the last ten thousand years the Southwest has usually been at least as hot and dry as it is today, and there were short periods of extreme drought. (Patterns in Prehistory)