Between about 20,000 and 12,500 BC, glaciers expanded over many areas of American and Eurasia, altering climates around the world. Within this span there were shorter cycles of climate change, periods of several thousand years in which the climates became relatively warmer or cooler, drier or wetter. For most of this period, the sea coasts expanded as ocean levels fell. Forests covered coastal areas around the northern and eastern Mediterranean but many higher areas of southwest Asia were dry steppe or grasslands. (Patterns in Prehistory)

...the whole of the Persian Gulf – in fact to a point well beyond the Strait of Hormuz in what is now the Gulf of Oman – was dry land between 18,000 and 14,000 years ago. Only then did the sea begin to transgress into the Gulf itself, first as a narrow waterway, later as a recurrent cycle of powerful short-lived floods, each followed by a partial recession of the floodwaters, then a standstill, then renewed flooding at irregular intervals. (Underworld) 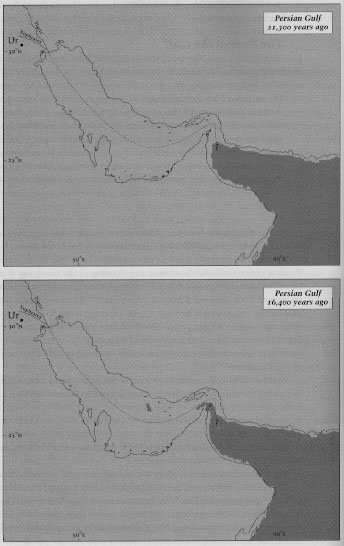 During the latter part of the last ice age, between 20,000 and 10,000 years ago, the eastern Sahara was uninhabited and extremely arid. (Before the Pharoahs)

Between about 30,000 and 10,000 years ago, European climates began a long cooling trend with some periods of extreme cold, but for most of the period the summers were cool and the winters relatively mild. The rich European grasslands and mixed forest habitats supported great numbers of herbivores, including reindeer, deer, bison, wild ox, ibex, woolly rhinoceros, and mammoths. France seems to have been densely occupied during this period, particularly near the confluence of the Dordogne and Vezere rivers. This lovely part of the world is a well-watered, heavily forested limestone formation, honeycombed with caves and rock shelters, which offered excellent places to live. (Patterns in Prehistory)

One of the most amply documented Upper Paleolithic cultures in eastern Europe is the Kostenski-Bershevo culture centered in the Don River Valley, about 470 kilometers southeast of Moscow. About 25,000 to 11,000 years ago, the Kostenski-Bershevo area was an open grassland environment, with no rock shelters, caves, or other natural habitations, and with very little wood available for fires. People here left a variety of archeological sites. (Patterns in Prehistory)

This map shows the enormity of the changes wrought in Greek lands from 16,000 BC (the glacial maximum) to 7000 BC, by which time the coastal geography of Greece was pretty much as it is today. As Van Andel and Shackelton have so well demonstrated in their recent study of this phenomenon, Late Paleolithic Greece was, to say the least, "a very different country. In short, the Greek peninsula was both simpler in outline and much larger than it is today. "The distinct possibility exists that entire subsistence strategies based on coastal plains may have vanished as their territories became submerged.” (Plato Prehistorian)

Like the paleogeographers at Franchthi Cave, Plato's Egyptian priest also saw the Greece of Solon's day as a "mere remnant" (Critias 111) of her former size--a remarkable coincidence in itself--but the priest blamed deluge, earthquake, and subsequent erosion: You are left, as with little islands, with something rather like the skeleton of a body wasted by disease; the rich, soft soil has all run away leaving the land nothing but skin and bone. But in those days the damage had not taken place; the hills had high crests, the rocky plain of Phelleus was covered with rich soil. ... (Critias 111) (Plato Prehistorian)

Straddling the thirty-sixth parallel, Malta is the southernmost point of Europe - indeed it is further south than the cities of Tunis or Algiers in North Africa. And while Malta today is a small archipelago 90 kilometres from Sicily - which is itself separated from the Italian mainland by the Straits of Messina - we know that this was not the case at the Last Glacial Maximum 18,000 years ago. (Underworld)

…there is no dispute from any authority that during the extremely cold and arid periods that occurred several times between 17,000 and 10,000 years ago: man and animals could migrate from the Italian peninsula, by land, to the warmer climates of the Siculo-Maltese district. Herds of red deer left northern latitudes and settled in all parts of present-day Sicily, the present-day Egadi islands of Favignana and Levanzo, and the Maltese archipelago, the latter site being the warmest of the Siculo-Maltese district during the Pleistocene. (Underworld)

Until 16,400 years ago Malta was still joined to Sicily by a land-bridge. The land-bridge was severed by rising sea-levels between 16,400 years ago and 14,600 years ago. However, the new straits created were at first extremely narrow and most of the mass of the former isthmus remained above water. (Underworld)

Ironically, the site with perhaps the best claim to a pre-12,000 BP date date in the Americas is among the farthest south, Monte Verde, in south central Chile. Here Tom Dillehay and his crew have excavated a camp site that has been radiocarbon-dated to about 13,000 years ago, and below the levels of that age are layers of tools and debris that may be much older, perhaps up to 33,000 years old. (Patterns in Prehistory)

The Monte Verde dates have recieved some support in the form of radiocarbon dates of hearths from sites near Pedra Furada, in eastern Brazil, where numerous stone tools and animal bones were found with charcoal in stratified layers that yielded a consistent series of twelve dates from about 32,000 to 17,000 years ago. (Patterns in Prehistory)

We have two areas lying at similar distances from their respective poles. In one, the northern, we have many evidences of heavy glaciation, extending over a period of perhaps 40,000 years, but ending about 14,000 years ago, to give way to the present climate about 10,000 years ago. In Chile and Argentina, on the other hand, in the same relative latitude just as close, presumably, to a pole, we have no glaciation until after the climate has become normal for the present temperate zone in the north. It appears that in Argentina a cool period set in just as the hipsithermal phase with higher temperatures set in all over the northern hemisphere! Clearly, then, there was no similarity in climatic trends, but rather the opposite. (Path of the Poles)

Today, Eskimos using skin boats easily cross the ninety kilometers of open sea separating Siberia and America, and recently an American woman slathered herself with grease and actually swam from Alaska to Siberia. But such a sea crossing would not have been necessary during much of the Pleistocene. During periods of glacial advance within the last million years, enourmous quantities of water were converted to ice, lowering the sea level sufficiently to expose a 1500- to 3000-kilometer-wide expanse of the floor of the Bering Sea. This land bridge--usually referred to as Beringia--was probably available at least four times in the last 60,000 years. (Patterns in Prehistory)

Prior to 10,000 years ago, species of deer, bison,camels, bears, foxes, mammoths, moose, caribou,and even rodents crossed from Siberia into the New World. Going in the other way--from America to Asia--were foxes, woodchucks, and, during the early Pliestocene, the ancestors of modern forms of horses, wolves, and other animals. (Patterns in Prehistory)

Interior Alaska and Canada were relatively rich environments in the mid-Wisconsin interglacial, and at times humans may have had a narrow but clear ice-free run all the way to South America during this period. Pollen cores from easternmost Beringia suggest that from 30,000 to 14,000 years ago, the time when most archeologists think the first Americans arrived, the "landscape of Beringia consisted of relatively bare polar desert or fell-field tundra, a rocky terrain sparsely vegetated by herbs and dwarf shrubs. This suggests that the late Wisconsin environment in this part of Beringia was as harsh as the modern high Arctic. (Patterns in Prehistory)

During the maximum extent of the Wisconsinan glacial period, the overall global temperature was about 12°F lower than today's, and near the glacier's edge it was - on average - 18° cooler. Anticyclonic winds spun clockwise above the glacier, and cold winds tended to sweep downslope from ice to the exposed land near the glacier, which would have tended generally to be tundra underlain by permafrost for perhaps some 125 miles south. One effect of the cyclonic winds was to render the eastern lands of the United States wetter and some western lands drier. At the same time, cooler, moist air was common in today's American Southwest and Great Basin area, with far more rainfall then than now. One result was the occurrence of huge so-called pluvial lakes, some reaching the proportions of inland seas, such as the Lake Michigan-sized Lake Bonneville in Utah, once more than 1,200 feet deep, the remains of which can now be seen in Great Salt Lake and the Bonneville Salt Flats... (The First Americans)

Thus we are able to say that warm conditions in the Arctic Archipelago of Canada persisted for the entire duration of the Wisconsin glaciation, from 40,000 years ago down to the establishment of modern conditions. Yes, if the pole were in Hudson Bay, the Arctic should be warm. And the Arctic was warm. However, there is much more evidence. ...the Arctic Ocean was warm during most of the ice age, particularly from about 32,000 to about 18,000 years ago.
Temperate conditions had evidently prevailed in Antarctica in the not distant past. The sediment indicated that no fewer than three times during the Pleistocene Epoch a temperate climate had prevailed in the Ross Sea. (Path of the Poles)

We have two areas lying at similar distances from their respective poles. In one, the northern, we have many evidences of heavy glaciation, extending over a period of perhaps 40,000 years, but ending about 14,000 years ago, to give way to the present climate about 10,000 years ago. In Chile and Argentina, on the other hand, in the same relative latitude just as close, presumably, to a pole, we have no glaciation until after the climate has become normal for the present temperate zone in the north. It appears that in Argentina a cool period set in just as the hipsithermal phase with higher temperatures set in all over the northern hemisphere! Clearly, then, there was no similarity in climatic trends, but rather the opposite. (Path of the Poles)

Working on the assumption that the earth’s magnetic fields are usually located in close proximity to the pole of rotation, Hapgood collected geo-magnetic rock samples from different parts of the globe indicating those areas of the crust, which were at the poles from the last three ECDs. Hapgood found evidence that the most recent ECD occurred between 17,000–12,000 BCE, at which time the crust displaced resulting in the North Pole’s relocation to its current place in the “Arctic” Ocean after having been located previously in the Hudson Bay region of northern Canada. More recent climatic data from different sources have been brought together indicating at dramatic climatic change at 12,000 BCE, which coincides with Pleistocene extinctions, rising ocean levels, the close of the ice age, and the origins of agriculture. (Atlantis Beneath the Ice)

The first great deluge took place in 16,000 BC … The second one occurred in 14,058 BC when parts of Kumari Kandam went under the sea. The third one happened in 9564 BC when a large part of Kumari Kandam was submerged. (Magicians of the Gods)