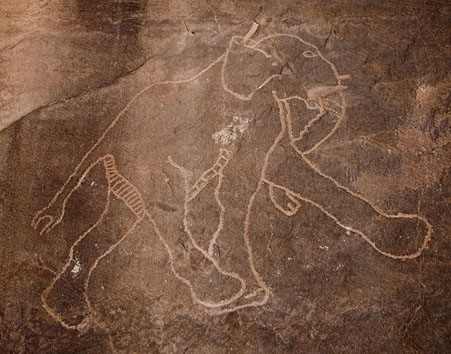 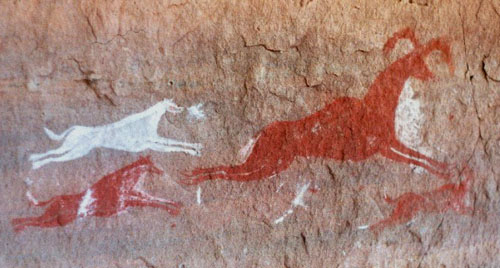 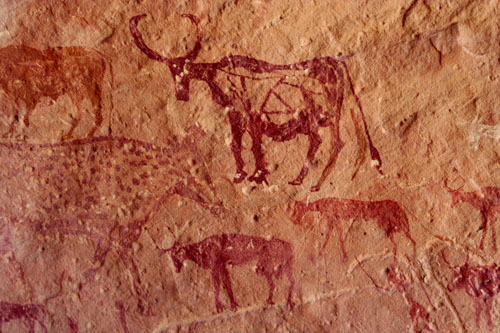 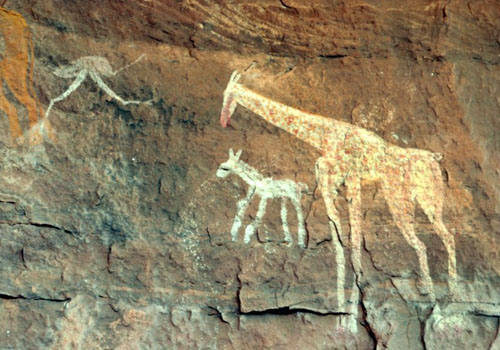 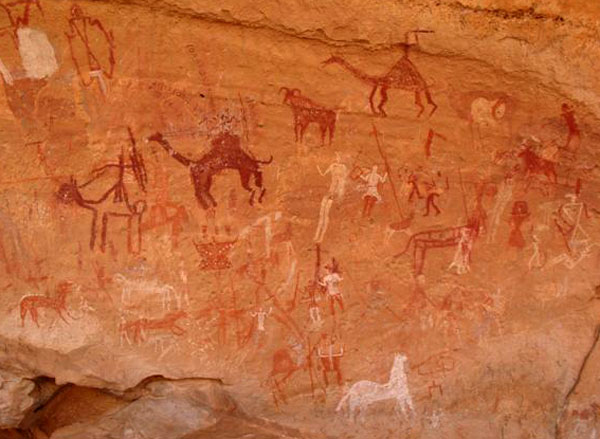 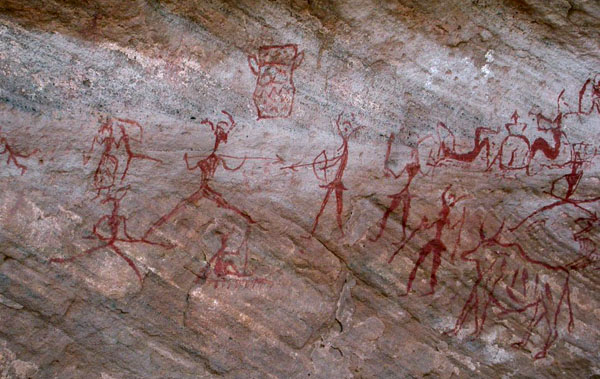 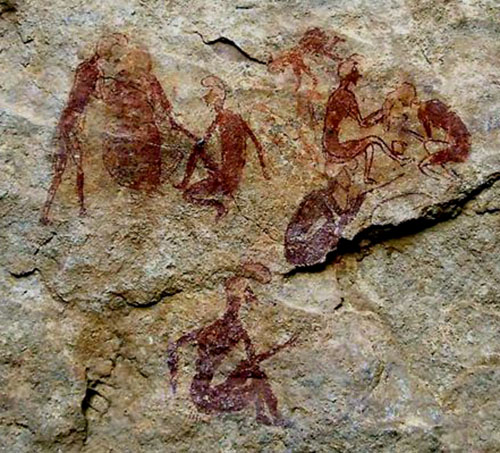 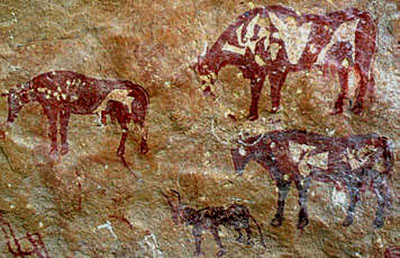 Before the disappearance of its water resources the Sahara, already sand belt and waterless desert in Herodotus' time, is believed to have been part of a "veritable garland" of rich vegetation stretching from the Atlantic to the Indus. The earliest phase of its rock art depicts a multitude of animal species that once inhabited this region: Bubalis antiquus (a now-extinct giant buffalo), Barbary sheep, giraffe, cattle, equid, rhinoceros. Known as the Large Wild Fauna phase, these rock carvings are of unknown age; but as one art historian pointed out, there is no reason to exclude the possibility that they are as old as the painted slabs recently recovered in southwest Africa, which at c. 25/23,000 BC are the earliest recorded examples of African art. (Plato Prehistorian)

Some fourteen animal burials were found in Mal'ta [in Siberia]: six of the arctic fox (do we think of Reynard and Coyote?); six of deer, in each case with the hindquarters and antlers missing (suggesting that the animals must have been flayed before burial, perhaps to furnish shamanistic attire); one of the head and neck of a large bird; and one of the foot of a mammoth. Six flying birds, and one swimming, of mammoth ivory - all representing either geese or ducks - were also found, along with an ivory fish with a spiral labyrinth stippled upon its side; an ivory baton, suggesting a shaman's staff; and finally - most remarkably - the skeleton of a rickety four-year-old child with a copious accompaniment of mammoth-ivory ornamentation. The little skeleton was found lying on its back in the crouch or fetus posture, but with its head turned to the left and facing the east, the point of the rising, or rebirth, of the sun. Over the grave was curved a large mammoth tusk, and within were many signs of a highly ceremonious burial. There was a great deal of red coloring matter in the grave - a common finding in paleolithic sites, as well as in the burial mounds of the North American Adena complex - and encircling the head was a delicate crown or forehead band of mammoth ivory. The child had worn, also, a bracelet of the same material and a fine necklace of six octagonal and one hundred and twenty flat ivory beads, from which a birdlike ornamental pendant hung. A second pendant, also in the form of a flying bird, lay in the grave, as well as two decorated medallions. One of the latter seems to have served as a buckle; the other, somewhat larger, showed on one side three cobralike wavy serpents, scratched or engraved, and on the other a stippled design showing a spiral of seven turns, with three spiraling S-forms enclosing it - the earliest spirals known to the history of art. (Primitiive Mythology) 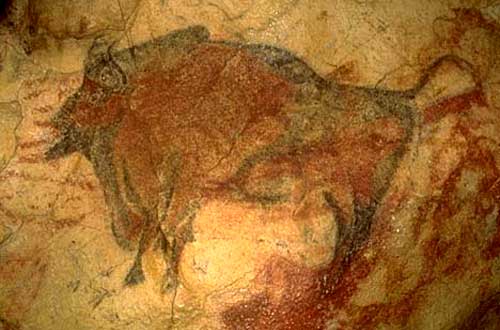 [The cave paintings at Altmmira, France] are now given dates between 34,000 and 12,000 years ago. Analysis shows that the colors were produced by mixing natural mineral pigments, such as ocher and manganese dioxide, with a binder (blood, urine, vegetable juice, or something similar), and that they were either brushed on with an implement made of animal hair or applied by making a kind of crayon from the pigments and lubricant. Some painting may also have been done by using a pipe to blow the powdered pigments on a surface prepared with animal fat. Many of these paintings were executed in the dark recesses of caves, by light provided by lamps made of stone bowls filled with animal fat, with a wick made of lichens, grass or juniper. (Patterns in Prehistory) 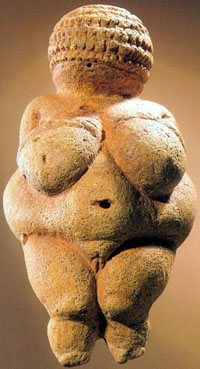 Venus fingurine from Willendorf, Austria. Late Pleistocene peoples appear to have celebrated human fertility in much of their art. (Patterns in Prehistory)

One of the most amply documented Upper Paleolithic cultures in eastern Europe is the Kostenski-Bershevo culture centered in the Don River Valley, about 470 kilometers southeast of Moscow. About 25,000 to 11,000 years ago, the Kostenski-Bershevo area was an open grassland environment, with no rock shelters, caves, or other natural habitations, and with very little wood available for fires. Like their Upper Paleolithic counterparts elsewhere, the Kostenski people manufactured a variety of decorative items, including "Venus" figurines (representations of women, usually with exaggerated secondary sexual characteristics). (Patterns in Prehistory)

Excavation analyses also suggest function may have varied among huts. One hut, set apart from the main settlement, was likely used to produce small figurines of clay, then "fired" in a nearby hearth. The well-known small female figurines called Venuses, usually emphasizing breasts and buttocks, were of Gravettian origin. (Before the Pharaohs)

Prior to around 20,000 BC all of Europe, from Russia to the Pyrenees, seems to have been loosely united under one great cultural banner to which the name Gravettian (after the French site of La Gravette) has been given. Best known for its fine mobiliary or portable art, the Gravettian collection includes representations of the human figure in the round, of which the most famous examples are the so-called Venus figurines found in western and eastern European sites. East and west were to take separate courses after 20,000 BC, however, when as noted by Leroi-Gourhan, the links between them “appear to have been cut, or at least considerably weakened." While eastern Europe remained in the Gravettian fold, western Europe ceased producing the Venus figurines and, following an interlude of fine projectile points, embarked on the greatest adventure in cave painting Europe would ever know--the art of the Magdalenians. (Plato Prehistorian) 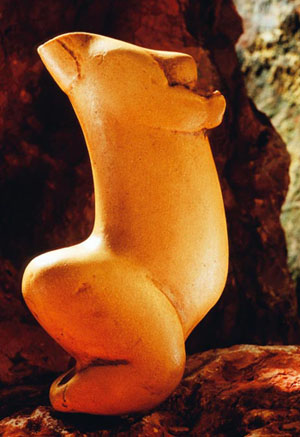 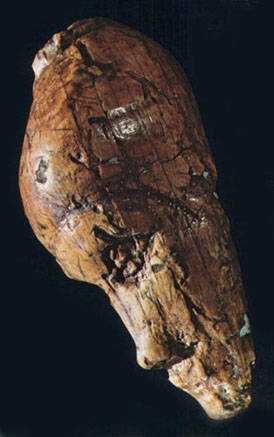 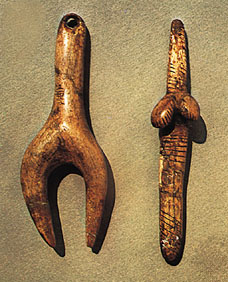 Dolni Vestonice is a 23/20,000 BC Gravettian site in Czechoslovakia. (Plato Prehistorian)

The caves were the sites of animal magic and of the men's rites. They are the underworld itself, the realm of the herds of the underworld, from which the herds of the upper world proceed and back to which they return. They are of the realm and substance of night, of darkness, and of the night sky, their animals being comparable to the stars, which are slain by the sun yet reappear. The mythologies of the animal masters and shamanism, the journey to the other world by way of a ceremonial burial, men's threshold rites, rebirth, and the masked dance inspired the liturgies of this brilliant age. ...in the temple-caves of southern France and northern Spain a firm continuity can be recognized, uniting the Magdalenian with the Aurignacian, as though the intervening Solutrean had been but a passing episode. The animal forms of the mural art now are masterfully rendered in a powerful, painterly style, with fluent lines and rich coloration, through eyes that had looked at animals in a way that has not been known since, and by hands perfectly trained. This art was magic. And its herds are the herds of eternity, not of time - yet even more vividly real and alive than the animals of time, because their ever-living source. At Altamira the great bulls - which are almost breathing, they are so alive - are on the ceiling, reminding us of their nature; for they are stars. And so here they are, these heavenly herds, in the primal abyss of the night sky. For according to the logic of this sort of dream, this game of myth, where A is B and B is C, this cave is the timeless abyss of the night, and these paintings are the prototypes, Platonic Ideas, or master forms of those temporal herds of earth, which - together with the people - are to play the play of the animal master, the willing death, and the sacramental hunt. (Primitiive Mythology)

Dolni Vestonice is the site of the earliest known examples of ceramic artefacts. Many carved and moulded images of animals and women, strange engravings, personal ornaments and decorated graves have been found in the clay soil. In the main hut, where the people ate and slept, two items were found: a' goddess' figurine made of fired clay and a small and exquisitely carved statuette made from mammoth ivory of a woman whose face droops on one side. (Climate Change in Prehistory)

In terms of interpreting the creativity of these people, perhaps the most impressive site is at Sunghir, some 150 km northeast of present-day Moscow. Here are the spectacular burials of two children, aged about nine and thirteen, and a man, possibly as old as 60, dating from around 25 kya. All three bodies have been decorated with a phenomenal number of artefacts. These consisted of many thousands of mammoth ivory beads, several hundred fox teeth pendants and a range of ivory ornaments. (Climate Change in Prehistory)

Located at the convergence of two major river basins, and roughly at the geographic center of South America as a whole, the shelter is known for its huge display of around 1,000 prehistoric paintings and drawings. In the long rectangular habitation area nearby, Vialou found and excavated a series of beautifully stratified deposits testifying to different periods of human occupation from 27,600 years ago down to 23,000 years ago. Some very finely worked and drilled bone ornaments were among the objects discovered.  (America Before)

...a paper in Nature boldly titled “Carbon-14 Dates Point to Man in the Americas 32,000 Years Ago.” It was a report on her work at a particularly large and richly decorated rock shelter called Pedra Furada where she had excavated “a sequence containing abundant lithic industry and well-structured hearths at all levels” documenting continuous human occupation over the entire period from 6,160 years ago to 32,160 years ago. In addition, she found conclusive evidence that at least one of the spectacular rock paintings was 17,000 years old... (America Before)