We look for articfacts expressing ritual or complex symbolism (with Homo of several hundred thousand years ago), but not a single figurine, wall painting, rock carving or even an elaborately made stone tool can be securely attributed to Homo erectus. (Patterns in Prehistory)

The multiple ways in which Homo spaiens diverged physically and behaviorally from pre-sapiens forms of Homo in the period between about 300,000 years ago to 30,000 years ago are collectively referred to as the "Middle/Upper Paleolithic transition." This "transition" is visible in many radical changes, such as increased aesthetic expression in figurines, usually of bone or stone, beautiful wall paintings, and rock carvings, burial techniques, and objects used for personal adornment, and the appearance of articfact styles and trade in exotic items that bespeak the first manifestation of some sort of regional "ethinic" identity that exceeds by a wide margin the local band society--in short, changes that may relkfect the "total restructuring" of social relationships. (Patterns in Prehistory)

...Edward Charlesworth, a Fellow of the Geological Society...found a set of sharks’ teeth with holes bored in them, in a way that suggested they were probably once strung together on a necklace... these were found in a layer of Red Crag dating from 2 million to 2.5 million years ago. (Humans are Not from Earth)

The making of blades and the processing of pigments, using grindstones, is 250,000 years old. (Before the Pharaohs) 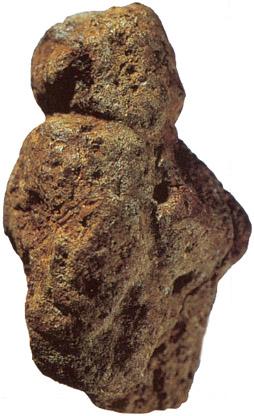 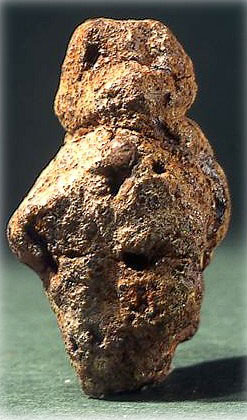 Extremely ancient though these 'Venus' figures are, they are young compared with one found at Berekhat Ram by Israeli archaeologists. A stone that had been naturally formed to have an appearance of a female figure bears marks to show that its shape was improved by a human hand more than 230,000 years ago! (Heaven's Mirror)